Buffalo - Land of the Bored 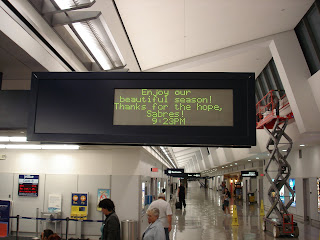 Such was the scene at Buffalo Airport on May 31, 2007 - two weeks AFTER Buffalo was lasooed out of the playoffs! TWO WEEKS!

On the same day I sat in front of three men on the plane. One of the fellows was coming to Buffalo to start a new job and the other two were waxing eloquent about the city. But then... then the one said in serious tones: "But you really need to go up to Toronto. It's beautiful up there... THEY PUT US TO SHAME." End of direct quote.

And frankly... that is my point exactly.

Have a nice summer grazing, Bisons!
Brought to you by the Paul at 11:13 pm

Email ThisBlogThis!Share to TwitterShare to FacebookShare to Pinterest
Tags: D.R.