D.R. Needs You to Empty His Basement 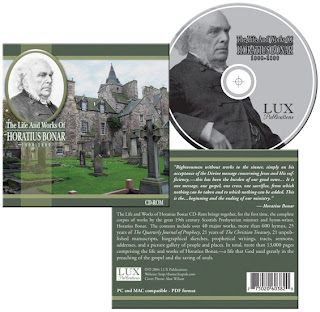 Have you purchased your copy of the Horatius Bonar CD-Rom?

I love mine, and Darrin has more for sale! This is a great resource.
Brought to you by the Paul at 11:53 am No comments: Links to this post

The Exclusivity of Jesus Christ: Does Exclusive Mean Intolerant?

political science professor Shadia Drury rightly concludes that in no way can Christianity be construed as “pluralistic and tolerant.”[i] Yet, these are the icons of our culture! Does this make the claims of Jesus politically incorrect? Does it mean that His teaching should be altered to reflect the more modern pluralism and multi-culturalism that defines many parts of this world – in particular ? Is Jesus irrelevant because He is intolerant?

Such is what many Christians are tempted to believe and this helps explain why our churches are becoming less and less a light in the darkness and more and more lost in the landscape.

It was not just the apostles who preached this way, however! Jesus Himself believed and taught the very same thing.

Churches, however, can be as moldable as a beach – shaped and contoured by the rising tides. The tides of pluralism, therefore, must be resisted; not in the name of Inquisition-like proselytization, but in the name of preaching the Truth.[ii]

With a few rare exceptions, Christians have been the framers of modern tolerance – Jesus Himself taught His disciples to “love their enemies.” This love, however, demands, not precludes the proclamation of the one, true and only way to God – faith in Jesus Christ!

Here is what the Bible says about Jesus…

I. Jesus has an exclusive UNITY with God the Father – no one has a relationship with Almighty God like His!

More than just a “messenger” sent from God, He is equal to God in ways that no mere man could ever be.

25 “I have said these things to you in figures of speech. The hour is coming when I will no longer speak to you in figures of speech but will tell you plainly about the Father. 26 In that day you will ask in my name, and I do not say to you that I will ask the Father on your behalf; 27 for the Father himself loves you, because you have loved me and have believed that I came from God. 28 I came from the Father and have come into the world, and now I am leaving the world and going to the Father.”

When Jesus had spoken these words, he lifted up his eyes to heaven, and said, “Father, the hour has come; glorify your Son that the Son may glorify you, 2 since you have given him authority over all flesh, to give eternal life to all whom you have given him. 3 And this is eternal life, that they know you the only true God, and Jesus Christ whom you have sent. 4 I glorified you on earth, having accomplished the work that you gave me to do. 5 And now, Father, glorify me in your own presence with the glory that I had with you before the world existed.

It is a FACT: Jesus Himself is God!!

II. Jesus makes an exclusive REVALATION of God the Father – no one brings God to men like Jesus Christ!

41 So the Jews grumbled about him, because he said, “I am the bread that came down from heaven.” 42 They said, “Is not this Jesus, the son of Joseph, whose father and mother we know? How does he now say, ‘I have come down from heaven’?” 43 Jesus answered them, “Do not grumble among yourselves. 44 No one can come to me unless the Father who sent me draws him. And I will raise him up on the last day. 45 It is written in the Prophets, ‘And they will all be taught by God.’ Everyone who has heard and learned from the Father comes to me— 46 not that anyone has seen the Father except he who is from God; he has seen the Father. 47 Truly, truly, I say to you, whoever believes has eternal life.

12 “This is my commandment, that you love one another as I have loved you. 13 Greater love has no one than this, that someone lays down his life for his friends. 14 You are my friends if you do what I command you. 15 No longer do I call you servants, for the servant does not know what his master is doing; but I have called you friends, for all that I have heard from my Father I have made known to you.

25 At that time Jesus declared, “I thank you, Father, Lord of heaven and earth, that you have hidden these things from the wise and understanding and revealed them to little children; 26 yes, Father, for such was your gracious will. 27 All things have been handed over to me by my Father, and no one knows the Son except the Father, and no one knows the Father except the Son and anyone to whom the Son chooses to reveal him. 28 Come to me, all who labor and are heavy laden, and I will give you rest. 29 Take my yoke upon you, and learn from me, for I am gentle and lowly in heart, and you will find rest for your souls. 30 For my yoke is easy, and my burden is light.”

First of all, then, I urge that supplications, prayers, intercessions, and thanksgivings be made for all people, 2 for kings and all who are in high positions, that we may lead a peaceful and quiet life, godly and dignified in every way. 3 This is good, and it is pleasing in the sight of God our Savior, 4 who desires all people to be saved and to come to the knowledge of the truth. 5 For there is one God, and there is one mediator between God and men, the man Christ Jesus, 6 who gave himself as a ransom for all, which is the testimony given at the proper time.

III. Jesus offers an exclusive SALVATION to God the Father – the only way to get to God is through Him.

Since Christ alone can reveal God, being one with God, it follows that He alone can provide the way to God… or salvation.

27 for the Father himself loves you, because you have loved me and have believed that I came from God.

1 “Let not your hearts be troubled. Believe in God; believe also in me. 2 In my Father's house are many rooms. If it were not so, would I have told you that I go to prepare a place for you? 3 And if I go and prepare a place for you, I will come again and will take you to myself, that where I am you may be also. 4 And you know the way to where I am going.” 5 Thomas said to him, “Lord, we do not know where you are going. How can we know the way?” 6 Jesus said to him, “I am the way, and the truth, and the life. No one comes to the Father except through me. 7 If you had known me, you would have known my Father also. From now on you do know him and have seen him.”

36 Whoever believes in the Son has eternal life; whoever does not obey the Son shall not see life, but the wrath of God remains on him.

11 And this is the testimony, that God gave us eternal life, and this life is in his Son. 12 Whoever has the Son has life; whoever does not have the Son of God does not have life.

23 Whoever hates me hates my Father also.

39They answered him, "Abraham is our father." Jesus said to them, "If you were Abraham's children, you would be doing what Abraham did, 40 but now you seek to kill me, a man who has told you the truth that I heard from God. This is not what Abraham did. 41 You are doing what your father did." They said to him, "We were not born of sexual immorality. We have one Father--even God." 42Jesus said to them, "If God were your Father, you would love me, for I came from God and I am here. I came not of my own accord, but he sent me.

There is no denying the fact the Bible teaches that Jesus is an exclusive Saviour. No other prophet or speaker has ever claimed to be God – and certainly none have verified that claim with the miracles Jesus performed (such as giving sight to men born blind, walking on water and raising the dead).

Jesus alone is one with God. Jesus alone has seen God and can therefore reveal Him to us. Jesus alone is able to save men from their sins and thus, enable them to have sweet fellowship with God their Maker.

He is an exclusive Saviour.

12 And there is salvation in no one else, for there is no other name under heaven given among men by which we must be saved.”

Is He YOUR Saviour? Dear friend, read over these words from the Bible again and again. Let them fill up your mind and let them point you to the Saviour of sinners. Turn away from your sins and your self-reliance and put all your hope and faith on the only true Saviour this world will ever know, Jesus Christ.

[ii] For another helpful article on this topic, see Tolerance, Truth-telling, Violence, and Law by Piper http://www.desiringgod.org/library/topics/culture/tolerance_principles.html

Brought to you by the Paul at 3:16 pm 5 comments: Links to this post

It is great to see Dr. Al Mohler blogging again and even better to see that he agrees with my post on the news that the Society of Obstetricians and Gynaecologists of Canada recommends all pregnant women have their babies screened for Down Syndrome and other genetic problems through amniocentesis.

When you combine this testing with the (so-called) neutral advice of the genetic counsellors, one begins to see the real agenda.

Joe Carter posted on the guilt women feel after abortion.

JT has a link to a free resource to pastors.
Brought to you by the Paul at 3:43 pm No comments: Links to this post

Duck shot by Florida hunter survives 2 days in refrigerator (In Case You Thought I Was Lying!)

Who utwittingly puts a half-dead duck in their fridge!?!!!