One joy in hosting a conference like we are doing tomorrow is getting to see your sheep step up to the plate to serve. I have been humbled again and again as folks at GFC have volunteered their time and energy in a multitude of ways to make this conference a great time for everyone.

I suppose we will not please every registrant, but I am rejoicing that my friends are working hard to do just that anyway. Probably the biggest disappointment everyone will have to deal with is me! Sorry... but you get what you pay for!

Another thing that I am looking forward to at the conference is the networking that will take place between churches. I have been preaching in a lot of different and new-to-me places lately and I am thrilled with what the Lord appears to be doing in so many churches. It is hard not to feel excitement at what lies ahead.

I have always loved 6, but this chapter has confirmed to me what I have long held to be true about ’s writings: a simpleton can understand them... and a brilliant mind can study them for life. (I place myself somewhere in the middle of those extremes, but closer to the first one!) With what is certainly the simplest vocabulary in the New Testament, the beloved disciple is able to teach some of the most profound truths. This week we get to ponder predestination, preservation and the effectual call – all in the span of 14 verses!

Long-time readers of this blog will know that my nephew Julian is my paid assistant at GFC. This new Dad, seminary student, friend, brother-in-Christ has proven his mettle yet again this week doing so much of the grunt work for WIS 2008. I would be 90% less productive without him. Actually, I would probably just be dead from the stress!

Sometimes I think it is really funny that author (formerly known as “uber-blogger”) Tim Challies is a member of our church. My man has been taking some cheap shots in the blogosphere the past few weeks and this is just my public affirmation that Tim is a real person, a good friend, a faithful church member and has committed no felonies in recent memory. Wait, do we even have “felonies” in ?

Since I am on the love path, it would be completely inappropriate for me to not mention my co-elder Murray. He is the last person on earth who would take offense at not being mentioned, which is why it is nice to do it! Few people on earth are more a part of my life and ministry and more supportive of it than . He is more than a brother.

A lovefest is never complete without talking about one’s wife. I rarely do that on this blog for a host of reasons... but you should know I love her like no other. No man deserves a wife – and in no fashion does this man deserve a wife so wonderful!

See you tomorrow if you are coming!

Worship in Song – You Can Pray for Us!

One more day until the big Worship in Song Conference. I just finished my final preparations for the three sessions and one workshop I will be leading. The conference booklet is getting printed. Books to sell are getting packed up and ready to be moved (including Tim Challies’ Discipline of Spiritual Discernment which he may even sign for you!). Secret gifts are being packed. This looks like a great time.

One thing I would like to do today is thank our friends at Sovereign Grace Ministries. They have been very supportive of this conference in ways that I will announce on Saturday and perhaps later on this blog.

A dear brother called today to see how I was doing. He mentioned that he expected some spiritual attack since we were taking the time to consider the primary activity of every Christian – worship. It made me think that even if you are not able to attend, it would be great if you could pray for us. Like any meeting, there are a million things that could go wrong even with the best of planning. Please pray that the Lord is glorified no matter what the circumstances!

As a way of saying thanks, we will be sure to let you know when the audio for these sessions is posted. They will be available for free download in the near future.

Worship in Song Conference - Only 2 Days to Go!

Are you a procrastinator? Well, you may be okay.

The Worship in Song Conference has been filled up for a while now, but we had a couple of spots open up in the last few minutes. If you are still interested in coming to the conference, then send an email to julian[at]gfcto[dot]com and we will try to fit you in.

We are all getting quite excited to meet you and serve you as the day approaches. We have lots of great stuff to do, talk about and give away – I should think it will be a really fun day.

Brought to you by the Paul at 3:22 pm No comments:

I Am Wearing My Mats Sundin Jersey Today 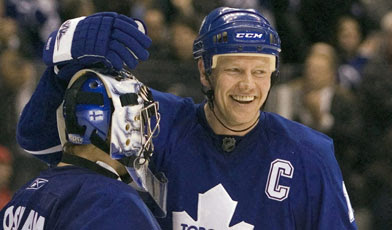 I am wearing my Mats Sundin jersey today. The Toronto Maple Leaf released this statement yesterday.

"I have carefully considered the team's request that I waive my no-trade clause. I have always believed I would finish my career as a Toronto Maple Leaf so the actual request was still a very difficult one for me to contemplate. I have spoken to and listened to my family and those closest to me about this issue. In the end, there is no right decision in a situation like this one.”

"I cannot leave my teammates and join another NHL club at this time," Sundin added.

"I have never believed in the concept of a rental player. It is my belief that winning the Stanley Cup is the greatest thing you can achieve in hockey but for me, in order to appreciate it you have to have been part of the entire journey and that means October through June. I hope everyone will understand and respect my decision."

Back in the days when men knew what the word chivalry meant, it was considered honourable for the captain to go down with his sinking ship. Men understood that honour and courage were virtues and they sought to live life in a way that accepted even hard providences with a resolute heart.

Mats Sundin has played for the Leafs for 13 years. He has captained them for ten. During that time he has developed into one of hockey’s most dependable elite players with a knack for scoring the big goal when most needed.

He is not a fighter... and that has always kept some fans wary of their first European captain. Yet, I doubt there has been one other NHL player who has made more second-rate athletes look better. Without bona fide talent at his side for nearly a decade, Sundin has played through a boatload of second and third liners... and not once did he whine about it.

You see, this is what I have always loved about Mats. He takes the high road. Oh, he is not perfect, but in a long NHL season, it is Mats who has to come and talk to the press when the team loses. It is Mats who has to be positive about poor goaltending. And Mats has to publicly support really pathetic management. Somewhere along the line, he figured out his role as captain and he has served in that capacity brilliantly.

And now Mats says he wants to finish out in the city he loves with a jersey he loves on his back. And why? Because this is his team. He is the captain. These are the guys he has fought through a bad season with. Sure he could bolt to some contender, get the team a few draft picks and maybe win the cup. But for loyal men, that stinks of treason.

My land, for once in this sad world of professional sports a multi-million dollar athlete is thinking about somebody else! “Oh,” say the critics, “if he were thinking about others he would let the team trade him.” Are you kidding me? His loyalties are in order, and they start with the guys in that locker room. Very Canadian, one might say.

They used to call Mats, “Captain Clutch.” He’s “Captain Chivalry” in my books. And cheers to my captain! I wear his jersey... my only jersey... with pride today. Mats is my kind of man. 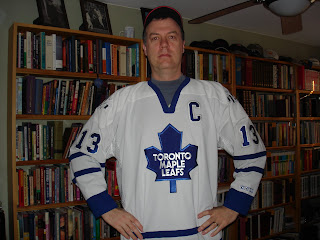