"When you finish a book, what system have you developed in order to remember and reference that book in the future?

I index books as I read them, by writing short notes in the front of the book with page numbers beside them. In a good book there may be over a hundred such notes.


Currently, what sport do you like to play and/or watch?

I enjoy watching gymnastics, soccer, basketball, and football, in that order. If my back weren’t so stiff I would love to play racquetball. When our staff goes away we play volleyball and floor hockey."
Brought to you by the Paul at 3:22 pm No comments: 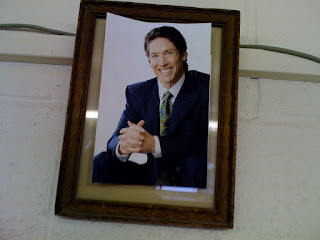 A certain world famous blogger thought it would be really funny to cover up my portrait of C.H. Spurgeon today with the glimmering smile of one Joel Osteen. Now there is a study in contrasts!

Speaking of contrasts… watching Mr. Osteen on Youtube today made me pause in wonder at what he does in a pulpit compared to what Dr. Pierre Constant was urging upon us at the Toronto Pastors Fellowship yesterday. Pierre had a great presentation on how to preach the text.

Every week, Joel and the thousands chant:

“This is my Bible. I am what it says I am. I have what it says I have. I can do what it says I can do. Today I will be taught the word of God. I boldly confess my mind is alert, my heart is receptive; Ill never be the same. In Jesus name, God bless you.”

And then everybody puts their Bible under their seats and listens to Joel talk about stuff.

Osteen is a pretty easy target, but I wonder how many times what we call “expository preaching” is not that much different from what happens in Texas every week? Do we really say what the Bible says? Do we stick to the text and only the text? Do we labour in study and pulpit to not only tell our people what it says, and what it means by what it says… but also to teach them by our methods how to do that on their own? Pierre gave some wonderful instruction on how to do it all. Be sure to download the audio and a pdf of the paper to follow along.
Brought to you by the Paul at 3:47 pm 4 comments:

Preaching and Preachers
By D. Martyn Lloyd-Jones
When asked by young preachers what books they should read, I always start with Martyn Lloyd-Jones’ Preaching and Preachers. I doubt there has been a more important work written on the whole realm of the preacher in the English world. MLJ wrote the book after teaching on the subject at Westminster Theological Seminary in 1969. That “the Doctor” had something to say on the matter of preaching was obvious. Although asked to give a lecture here or there on the matter over the years, he always refrained feeling that the topic needed a whole series of talks in order to do it justice. And it was only after 44 years of preaching an average of 5 times per week that he felt he could put his thoughts into book form.
MLJ writes as a preacher to preachers. I have read too many books by homileticians that do not take into account the calling of the pastor to be the “kerux.” Talking from a pulpit, waxing eloquent in some conversational style, shouting at people – these are not preaching. But, as Lloyd-Jones writes, “[The preacher] is the only one who is in a position to deal with the greatest need in the world.” If that is true, we preachers had best know what we are doing!
The book progresses logically (was the Doctor ever illogical?) through 16 chapters with titles like, “the Form of the Sermon,” “the Preparation of the Sermon,” and “Illustrations, Eloquence, Humour.” Where this works differs from so many inferior attempts is in MLJ’s constant attention to the one doing the preaching. What does preaching feel like, what are the joys of discovery, what mistakes are easy to make, what role does the Spirit play in our delivery; these are the questions that get answered all through the text.
This is vintage Lloyd-Jones. I have often heard young ministers complain that the older ones are not training them. That may be true, but no one has an excuse not to learn from an old MLJ. Sit down with this book and you will profit your own soul, your ministry and your people. Learn at the feet of one who was likely the greatest preacher of the 1900’s.

Preaching with Purpose
By Jay Adams
One problem I have observed with many books on preaching is a problem many of us preachers run into in our pulpits – we try to say everything about something, and end up saying nothing at all. Preaching is an enormous topic and to do it justice a great deal must be written – unless one chooses to deal with only one aspect of preaching.
Wisely narrowing his focus, Jay Adams has written a very helpful book on preaching with purpose. In essence, Adams has sought to demonstrate why it is we preach.
I must admit to not being a huge fan of Adams writings. Perhaps that is why this book sat on my “to read” shelf for a few years before I finally picked it up. But once I began it was impossible to put down.
The basic thesis of the book is that the goal of preaching is to effect change. This may not sound terribly profound, but was that the purpose of your last sermon? Adams rightly observed that many preachers are abstract, wandering, dull, and pointless in the pulpit. People should be rightly asking, “Why do we come here and why do you talk?” And so, he begins a careful analysis of how to develop purpose to your preaching.
I will be the first to admit that I do not agree with every suggestion Adams makes (and “suggestion” may be too polite of a term to use), but even if we do not agree there is good discipline in having to answer why. I think that is what I most appreciated about this little book, it forced me to answer the why questions again and again. It is unlikely anyone else will ask you.
Pick up this little book and read one of its 22 chapters every day and you will see some spark and clarity added to your preaching – guaranteed!


Preaching with Passion
By Alex Montoya
Full disclosure: Alex Montoya was one of my favorite seminary professors and remains a good friend.
I recall a time early in my ministry when I preached a particularly poor sermon… with a great deal of emotion and excitement. A man in that church approached me afterwards bubbling over with excitement about how wonderful a sermon that had been. I looked at him rather dumbfounded then came to that important realization that some people could care less what you say, as long as you say loud and getting really, really excited about it!
That being true may be why so many of us that love the sovereignty of God shy away from any kind of “emotionalism” in the pulpit. We do not want to interfere with the work of God or confuse emotion with conviction – therefore we preach like a sheet of plywood.
Alex Montoya has served the church be writing this small book on the passion that is necessary in the preaching of God’s Word.
The eight chapters cover preaching with spiritual power, conviction, compassion, authority, urgency, brokenness, the whole being and imagination. Each chapter is argued Biblically, described practically and full of excellent examples. Montoya’s subtle wit runs throughout, often disarming us before lowering the hammer. Again, this is the work of a preacher speaking to preachers.
Many of us had the privilege of sitting under Montoya’s ministry at the 2005 Toronto Pastors Conference. If you would like a taste of that again, then I highly commend this book to you!
Brought to you by the Paul at 5:41 pm 1 comment: