Tim’s recent post on blog accountability brought to mind something I have recently committed to practice any time I leave a comment, reply or post something on my own blog. This really came into focus while I was preparing my paper on the emergent church.

About three days before the paper was due to be presented there arose the distinct possibility that Brian McLaren would be in attendance. Since so much of the paper had to do with him, I quickly read over the entire piece with a new set of eyes! It ended up I didn’t really change anything – mostly because I had tried to write the paper with the thought that those sympathetic to emergent ideals would be present. I attempted to be forthright, but not hyperbolic.

Now I say all that to say this.

Some of these authors I have contacted directly either on their comment string or via email if it was given. To a man (and they were all men) every one was much more gracious in their reply. But this taught me something.

I believe Christian bloggers ought to make it their golden rule to never type anything they would not say to or about a person if they were standing right in front of them.

It seems rather simple, but I have read some very disappointing things on other blogs when the author appears to think his opponent is not reading. I have also read things said about me that seem very inconsistent to what was said to me in person.

I am not foolish enough to think that I have never done this, which confirms that I am not trying to blame anyone nor will I identify examples. I cannot recall when I did it (I can barely remember what I did yesterday!), but it seems too easy a sin to fall in to for me to not have been guilty at some level. For that I ask your forgiveness – and hope for your accountability in the future.

Christian blogging ought to be one more place where our attitudes and actions (and keystrokes) demonstrate the remarkable and supernatural work of the Holy Spirit in us to the glory of God our Father.

Brought to you by the Paul at 5:17 pm No comments:

"According to Dr. Ivanka Savic, who conducted a study on the different responses to sex hormones by lesbian and heterosexual women, the findings of the research have been skewed by the media."

This article links to other interesting ones. It should not be shocking that the MSM has once again tweaked information to fit its agenda.

This link has some interesting perspectives on the issue also.
Brought to you by the Paul at 4:16 pm 1 comment:

Tim has an important post today on being accountable for our words (especially on blogs!) and not hiding in annonymity.

I was going to post on this next week, but he has said more than I ever would - so I think you should read it!
Brought to you by the Paul at 2:58 pm 2 comments:

One thing I love to think about is the gracious work of God in saving sinners like me. It was perhaps for that reason that I was drawn to Stephen Smallman’s Spiritual Birthline: Understanding How We Experience the New Birth (Crossway, 2006). The book is an attempt to discover how people experience the work of the Holy Spirit in spiritual birth; especially to show how the Spirit is at work in a person’s life before they actually exercise faith in Jesus (19).

Clearly this is a topic that has not received a lot of attention in recent evangelicalism and I am glad Smallman has taken the initiative to write on it. The author is an experienced pastor and the warmth of this experience is really evident on every page. That is perhaps what I most enjoyed about the book. Smallman is intent on showing us that there is no cookie-cutter process that God uses with each individual, rather each person is saved by the Lord through a massive variety of interventions, events, and such things. One job of the faithful pastor is to carefully examine people to see where they are in this process and help them along in it toward Christ.

Having said that, I do have some major concerns about the theology of the book. My own view is that Smallman has pressed the human birth process too far as an analogy for what happens in spiritual birth. Although he unequivocally states that the Scriptures must be the final authority in interpreting our salvation experience (34), he undoes his own argument by beginning the book with personal experiences and the illustration of human conception and birth, then setting out to make the Word fit his description. (This methodological error is apparent in chapter 7 (72, 73) as well.

The whole premise of the book can be captured in the following model:

Right away we are met with an interesting proposal. Smallman suggests that spiritual life exists before conversion and that the evidence of this is the effectual call that is taking place on the individual; what he also describes as the “process of coming to a conscious faith, once the work of God has begun...” (27). He attempts to defend this from Jesus’ conversation with Nicodemus in 3 – but I remain unconvinced.

It seems that Smallman has confused what older theologians referred to as “awakening” with the “effectual call.” In their careful language they were holding forth the difference between a King Agrippa and a . Agrippa was visibly agitated by the Apostle Paul’s preaching – awakened, but not converted. In another time and place, was awakened, too... but it was an awakening that led to conversion since the “Lord opened her heart to respond to the things spoken by Paul.” Then, and only then, could anyone know that was effectually called by God into a saving relationship with Himself. Smallman tries to protect this distinction between awakening and calling (without using the terms), but his pressing of the birth model keeps betraying his theology.

The question that plagued my mind through the book was this: Would the person who physically dies in “stage two” of “pregnancy/effectual calling” find himself in heaven with Christ. In other words, would the individual who has given no outward manifestation or profession of new life in Christ be truly born again? If consistent, I think Smallman would have to answer yes. In his zeal to stress the “process” of salvation as compared to the oft-touted “event-salvation” of modern evangelicalism, I think he has gone too far. In fact, he seems to suggest a kind of “ignorant conversion” (my term, not his) wherein “how people view themselves may not be the same as where they actually are or... where God sees them.” (42).

This comes into focus as he describes how the children of Christian families come to faith. He rightly notes that there are no second-generation conversion experiences described in the New Testament, but then he wrongly (in my opinion) turns to the Old Testament to find how it was children became a part of the community. What ends up being taught is a kind of “presumptive-regeneration light” that still tries to urge some form of public profession that acknowledges the words of Romans 10:5-17.

All in all I found the book rather frustrating. Not because there was so much in it that I disagreed with, but because there was so much in it that I liked. The emphasis on learning to search out the spiritual stories of others was very helpful. The reminder that not all come to faith in neat and predictable ways was also great. But the fuzziness of his soteriology (doctrine of salvation), and allusions to emergent trends – “belonging before believing” (55, 133), “open communion” (135), “kingdom living” (155ff) – makes me very hesitant to recommend the book. In dealing with matters of this magnitude, we need precision to the text.

I have just posted the next section on the examiningemergent blog, entitled Appendix Two: Was Jesus Purposefully Confusing In Order to Lure Others Into Following Him?

I think this is a very important section and wish I had more time to develop it. Just today Challies links to an article in which McLaren promotes some of this wrong thinking.

Brought to you by the Paul at 3:58 pm No comments:

It was my joy to travel to Together for the Gospel with Tim Challies, the official live-blogger of the event. It has been a long time since I "tagged along" with anyone, so I have to admit I thoroughly enjoyed this change of pace. People may wonder what it is like to travel with the world's most famous evangelical, Christian blogger. People may not. Either way, I thought I might produce a small photo essay to fill you in. 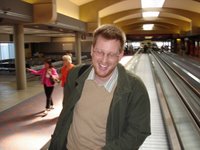 The first thing you ought to know is that Tim loves his fun, so we were forced to ride back and forth many times on those moving walkways at each of the four airports we used. Here is Tim simply gushing with joy as we reach the end of another thrill-filled 100 meters.


Our flight was late getting into Louisville, but we managed to make it to the Band of Bloggers meeting anyway. Tim is used to this kind of spotlight all over the world... notice the look of pure joy on his face as Dr. Al Mohler introduces him to the crowd of 120 or so gathered to sit at his feet. 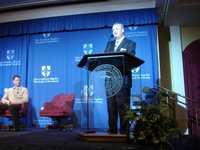 Of course, live-blogging requires a lot of... live-blogging... and dead-blogging, or not-so-live blogging... as Tim is doing here. (Candid photos like this are very rare. It is not every day you see a blogger blogging. Observe the careful stance, nuanced approach and bent fingers. Remarkable.) 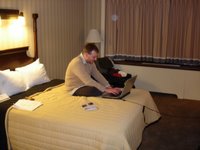 Well, I had more to add, but blogger is giving me excessive grief trying to add these photos. Suffice to say that Challeez is the man.

TIME.com: My Problem with Christianism

Andrew Sullivan wrote this article for Time's back page this week. If you thought Emergent was a passing fancy, then see how nicely it fits in the mainstream...

His premise:
"So let me suggest that we take back the word Christian while giving the religious right a new adjective: Christianist. Christianity, in this view, is simply a faith. Christianism is an ideology, politics, an ism. The distinction between Christian and Christianist echoes the distinction we make between Muslim and Islamist. Muslims are those who follow Islam. Islamists are those who want to wield Islam as a political force and conflate state and mosque. Not all Islamists are violent. Only a tiny few are terrorists. And I should underline that the term Christianist is in no way designed to label people on the religious right as favoring any violence at all. I mean merely by the term Christianist the view that religious faith is so important that it must also have a precise political agenda. It is the belief that religion dictates politics and that politics should dictate the laws for everyone, Christian and non-Christian alike."
Brought to you by the Paul at 12:00 pm 2 comments:

Leadership Blog: Out of Ur: Brian McLaren’s Inferno: the provocative church leader explains his view of hell:

It's as clear as a bright summer morning. People are cast into hell because of the guilt of Adam's sin imputed to them. People are rescued from hell when Jesus' righteous life and works are imputed to them and their sin and guilt is imputed to Him... on that glorious day when they repent of sin and place full trust in Christ alone.