Pray for These Boys... 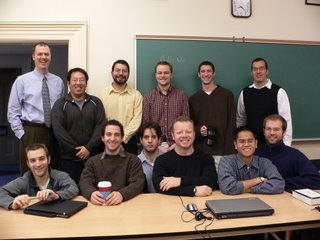 One of the real joys of my ministry is teaching pastoral theology at Toronto Baptist Seminary. I have been at it for a few years now, and I thank the Lord that I can be a part of what the Lord is doing at TBS.

The Lord has been working in powerful ways in our class this year. A lot of these guys are having my as a prof for the third time, and that familiarity along with abundant grace from the God who answers prayer, have both created a unique atmosphere.

I tend to think whatever I am currently doing is the best thing in the world... I mean, whatever books I am preaching are my favorite in the Bible - or whatever class I am teaching is my favorite group of guys... So, I don't want to talk over-the-top, but I have to say this is a great group of men.

What will the Lord do with these guys in the coming years? Who knows! But you can have a part of it if you pray for them.

So, why not look over the picture carefully, choose one or two to guys to pray for, and intercede before the Lord on their behalf.

(In case you were wondering, I am the well-dressed dude!)

A big shout out to all my American friends and relatives on this US Thanksgiving Day! I am missing the big shin-dig in Indiana this year - football in the morning, the giant meal, a devotional by one of the brothers-in-law, singing hymns of thanks to God and the delightful talent show! Thankfully, Mrs. Kerux and the keruxettes and the little kerux all made it down and are about to have the time of their lives.

Family is great, isn't it?

The link above will take you to an interesting article on the development of Thanksgiving Day in Canada. Unlike our neighbours to the South, we actually have Thanksgiving at a time that makes sense!

I love this part: "On January 31, 1957 Parliament issued a proclamation to fix permanently the second Monday in October as 'a day of general Thanksgiving to Almighty God for the bountiful harvest with which Canada has been blessed.'"
Brought to you by the Paul at 11:36 am 3 comments:

This is a multi-part series. You can catch up and get some context by reading the first three parts here: Part I, Part II, Part III

In the last study, we saw that the whole matter of how to treat each other when there are differences of opinion over secondary matters can be summed up in this way:

Weak brothers: Do Not Condemn!

Strong Brothers: Do Not Despise! Welcome!

Now we want to ask: what is the positive action that must take place in order for real unity to be achieved? That is the question that Paul answers in 14:13-23 – and as we will see, most of it has to do with the strong. So strong ones, listen up!

I. The Command: Judge Rightly

Paul begins with a command that is made up with two parts.

Therefore let us not pass judgment on one another any longer,

Therefore, let us no longer judge one another,

Paul moves from addressing the weak alone as “condemners” to commanding both the weak and the strong to stop condemning each other. He uses the word “judgment” in that sense: “stop writing off the other” – the one with whom you find yourself at different opinions. And what is quite clear in the grammar of the text is that Paul assumes this is something that is being done and he desires that it be done no longer!

Based on the fact that each man will stand before God – and that God Himself will bring each man’s life before Him and that man “will give an account.” “Therefore,” we should no longer judge one another! Leave that to God!

So the first thing is to stop the bad behaviour, but as Paul so often does, he describes for us the good behaviour that should replace this.

Mom and Dad, here is a practical lesson for you: When you command your child to stop one behaviour, the wise parent will instruct in what is the good behaviour. So, “stop hitting your sister with that log” ought to be joined with “and love her and play the game she wants to play!”

What is the positive behaviour Paul tells us to do? (it sounds negative at first)

B. Do not cause to stumble

"but rather decide never to put a stumbling block or hindrance in the way of a brother."

"but you rather judge this: to not place a stumbling-block or offence to the brother."

something that trips up another – causes them to fall; to fall over something

What does this mean? If you are not discriminating, by your actions you will throw logs in the path of your brother.

Once I was driving through in a freak winter storm. is barren and after 20 hours of driving I finally gave up the wheel to a girl traveling with us. As my eyes started to close, I woke up shouting, “There are logs in the road! Look out!”

Now, there were no logs! It was an hallucination, but they looked real! And if they had been real, we would have been in big trouble. A log across the road will throw you in the ditch. Like a cow on the tracks will derail the train.

As we progress through this paragraph, it becomes more in focus that Paul is thinking of the strong here. As they exercise their strength of faith in the face of the weak, it provokes the weak to sin. How? Possibly in many ways, but as we will see, the worst way is when the weak join in the actions of the strong that they think are wrong. They have violated their conscience and for them – it is sin.

So, judge rightly. Do not condemn and do not trip up.

Now, just like Paul offered theological, Truth–reasons for the command he gave in verse one, so he does the same thing here. This isn’t some kind of mamby-pamby let’s all just get along silliness. This is real unity in the face of real disagreement being described. So, why is it we are to quit condemning and setting traps and throwing up roadblocks for each other? Name one good reason!

Julian and Tim both commented on how powerful this moment was at the WorshipGod06 Conference. It is great to see it online!

Ryan Ferguson recites Hebrews chapters 9 and 10 - Google Video
Brought to you by the Paul at 2:13 pm 3 comments:

My old pal Clint Humfrey, along with dear friends the Mielke's are all involved in the early stages of a possible church plant in Calgary, Alberta!

If you live in the Calgary area, be sure to click on the link above and get the skinny.

And do pray for the progress of the Gospel in Calgary. From what I have learned over the years, Canada's West is much like "the South" in the USA - very "culturally Christian and moral" but without much real faith in Jesus.
Brought to you by the Paul at 5:12 pm 2 comments:

globeandmail.com: Keeping the faith, for the long term

Many of you will know of Jonathan Wellum, an elder at Trinity Baptist Church. The G&M has run an interesting story on Jonathan that demonstrates one man's living out the faith in the public eye. Jonathan has just been named the CEO of AIC, a Canadian investment firm and that is why the paper was interested. I personally hope the Lord blesses that company's socks off, so that Wellum might gain even more of a hearing for living an honest, godly life in this world. (And I don't even invest with them!)