Why Did the People of Lystra Think Paul and Barnabas Were Greek Gods? (Acts 14)

About 50 years before Paul and Barnabas entered the small town of Lystra, the Latin poet Ovid wrote his epic Metamorphoses. In it, he described a fictitious scene in which Zeus and Hermes took on human appearance and asked a thousand homes in Phrygia for lodging. They were rebuffed again and again until they came to the unassuming cottage of Baucis and Philemon.

Ovid is putting into poetic form what was a widely-known myth. This helps to explain why the citizens of Lystra were so quick to identify Paul as Hermes and Barnabas as Zeus after the miraculous raising of the paraplegic. Nobody wanted to miss extending hospitality to those two Greek gods again since, in the myth, they wiped out the entire area with a flood for their failure!

You can read it here if you like this kind of thing.

The Story of Baucis and Philemon

Thus Achelous ends: his audience hear
With admiration, and admiring, fear
The Pow'rs of Heav'n; except Ixion's Son,
Who laugh'd at all the Gods, believ'd in none:
He shook his impious head, and thus replies.
These legends are no more than pious lies:
You attribute too much to heav'nly sway,
To think they give us forms, and take away. 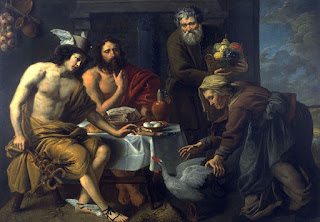 The rest of better minds, their sense declar'd
Against this doctrine, and with horror heard.
Then Lelex rose, an old experienc'd man,
And thus with sober gravity began;
Heav'n's pow'r is infinite: Earth, Air, and Sea,
The manufacture mass, the making Pow'r obey:
By proof to clear your doubt; in Phrygian ground
Two neighb'ring trees, with walls encompass'd round,
Stand on a mod'rate rise, with wonder shown,
One a hard oak, a softer linden one:
I saw the place, and them, by Pittheus sent
To Phrygian realms, my grandsire's government.
Not far from thence is seen a lake, the haunt
Of coots, and of the fishing cormorant:
Here Jove with Hermes came; but in disguise
Of mortal men conceal'd their deities;
One laid aside his thunder, one his rod;
And many toilsome steps together trod:
For harbour at a thousand doors they knock'd,
Not one of all the thousand but was lock'd.
At last an hospitable house they found,
A homely shed; the roof, not far from ground,
Was thatch'd with reeds, and straw, together bound.
There Baucis and Philemon liv'd, and there
Had liv'd long marry'd, and a happy pair:
Now old in love, though little was their store,
Inur'd to want, their poverty they bore,
Nor aim'd at wealth, professing to be poor.
For master, or for servant here to call,
Was all alike, where only two were all.
Command was none, where equal love was paid,
Or rather both commanded, both obey'd.

From lofty roofs the Gods repuls'd before,
Now stooping, enter'd through the little door:
The man (their hearty welcome first express'd)
A common settle drew for either guest,
Inviting each his weary limbs to rest.
But ere they sate, officious Baucis lays
Two cushions stuff'd with straw, the seat to raise;
Coarse, but the best she had; then rakes the load
Of ashes from the hearth, and spreads abroad
The living coals; and, lest they should expire,
With leaves, and bark she feeds her infant fire:
It smoaks; and then with trembling breath she blows,
'Till in a chearful blaze the flames arose.
With brush-wood, and with chips she strengthens these,
And adds at last the boughs of rotten trees.
The fire thus form'd, she sets the kettle on
(Like burnish'd gold the little seether shone),
Next took the coleworts which her husband got
From his own ground (a small well-water'd spot);
She stripp'd the stalks of all their leaves; the best
She cull'd, and them with handy care she drest.
High o'er the hearth a chine of bacon hung;
Good old Philemon seiz'd it with a prong,
And from the sooty rafter drew it down,
Then cut a slice, but scarce enough for one;
Yet a large portion of a little store,
Which for their sakes alone he wish'd were more.
This in the pot he plung'd without delay,
To tame the flesh, and drain the salt away.
The time beween, before the fire they sat,
And shorten'd the delay by pleasing chat.

A beam there was, on which a beechen pail
Hung by the handle, on a driven nail:
This fill'd with water, gently warm'd, they set
Before their guests; in this they bath'd their feet,
And after with clean towels dry'd their sweat.
This done, the host produc'd the genial bed,
Sallow the feet, the borders, and the sted,
Which with no costly coverlet they spread,
But coarse old garments; yet such robes as these
They laid alone, at feasts, on holidays.
The good old housewife, tucking up her gown,
The table sets; th' invited Gods lie down.
The trivet-table of a foot was lame,
A blot which prudent Baucis overcame,
Who thrusts beneath the limping leg a sherd,
So was the mended board exactly rear'd:
Then rubb'd it o'er with newly gather'd mint,
A wholsom herb, that breath'd a grateful scent.
Pallas began the feast, where first was seen
The party-colour'd olive, black, and green:
Autumnal cornels next in order serv'd,
In lees of wine well pickled, and preserv'd.
A garden-sallad was the third supply,
Of endive, radishes, and succory:
Then curds, and cream, the flow'r of country fare,
And new-laid eggs, which Baucis' busie care
Turn'd by a gentle fire, and roasted rare.
All these in earthen ware were serv'd to board;
And next in place, an earthen pitcher stor'd,
With liquor of the best the cottage could afford.
This was the table's ornament and pride,
With figures wrought: like pages at his side
Stood beechen bowls; and these were shining clean,
Varnish'd with wax without, and lin'd within.
By this the boiling kettle had prepar'd,
And to the table sent the smoaking lard;
On which with eager appetite they dine,
A sav'ry bit, that serv'd to relish wine:
The wine itself was suiting to the rest,
Still working in the must, and lately press'd.
The second course succeeds like that before,
Plums, apples, nuts, and of their wintry store
Dry figs, and grapes, and wrinkled dates were set
In canisters, t' enlarge the little treat:
All these a milk-white honey-comb surround,
Which in the midst the country-banquet crown'd:
But the kind hosts their entertainment grace
With hearty welcome, and an open face:
In all they did, you might discern with ease,
A willing mind, and a desire to please.

Mean-time the beechen bowls went round, and still,
Though often empty'd, were observ'd to fill;
Fill'd without hands, and of their own accord
Ran without feet, and danc'd about the board.
Devotion seiz'd the pair, to see the feast
With wine, and of no common grape, increas'd;
And up they held their hands, and fell to pray'r,
Excusing, as they could, their country fare.

One goose they had ('twas all they could allow),
A wakeful sentry, and on duty now,
Whom to the Gods for sacrifice they vow:
Her with malicious zeal the couple view'd;
She ran for life, and limping they pursu'd:
Full well the fowl perceiv'd their bad intent,
And would not make her master's compliment;
But persecuted, to the Pow'rs she flies,
And close between the legs of Jove she lies:
He with a gracious ear the suppliant heard,
And sav'd her life; then what he has declar'd,
And own'd the God. The neighbourhood, said he,
Shall justly perish for impiety:
You stand alone exempted; but obey
With speed, and follow where we lead the way:
Leave these accurs'd; and to the mountain's height
Ascend; nor once look backward in your flight.

They haste, and what their tardy feet deny'd,
The trusty staff (their better leg) supply'd.
An arrow's flight they wanted to the top,
And there secure, but spent with travel, stop;
Then turn their now no more forbidden eyes;
Lost in a lake the floated level lies:
A watry desert covers all the plains,
Their cot alone, as in an isle, remains.
Wondring, with weeping eyes, while they deplore
Their neighbours' fate, and country now no more,
Their little shed, scarce large enough for two,
Seems, from the ground increas'd, in height and bulk to grow.
A stately temple shoots within the skies,
The crotches of their cot in columns rise:
The pavement polish'd marble they behold,
The gates with sculpture grac'd, the spires and tiles of gold.

Then thus the sire of Gods, with looks serene,
Speak thy desire, thou only just of men;
And thou, o woman, only worthy found
To be with such a man in marriage bound.

A-while they whisper; then, to Jove address'd,
Philemon thus prefers their joint request:
We crave to serve before your sacred shrine,
And offer at your altars rites divine:
And since not any action of our life
Has been polluted with domestick strife;
We beg one hour of death, that neither she
With widow's tears may live to bury me,
Nor weeping I, with wither'd arms may bear
My breathless Baucis to the sepulcher.

The Godheads sign their suit. They run their race
In the same tenour all th' appointed space:
Then, when their hour was come, while they relate
These past adventures at the temple gate,
Old Baucis is by old Philemon seen
Sprouting with sudden leaves of spritely green:
Old Baucis look'd where old Philemon stood,
And saw his lengthen'd arms a sprouting wood:
New roots their fasten'd feet begin to bind,
Their bodies stiffen in a rising rind:
Then, ere the bark above their shoulders grew,
They give, and take at once their last adieu.
At once, Farewell, o faithful spouse, they said;
At once th' incroaching rinds their closing lips invade.
Ev'n yet, an ancient Tyanaean shows
A spreading oak, that near a linden grows;
The neighbourhood confirm the prodigy,
Grave men, not vain of tongue, or like to lie.
I saw my self the garlands on their boughs,
And tablets hung for gifts of granted vows;
And off'ring fresher up, with pious pray'r,
The good, said I, are God's peculiar care,


And such as honour Heav'n, shall heav'nly honour share.
Brought to you by the Paul at 12:26 pm No comments: