Well, That Was Pleasant!

"Mats Sundin scored twice and added an assist as the Toronto Maple Leafs dealt the Buffalo Sabres their first regulation-time loss of the season, a 4-1 pounding Saturday night in Buffalo."
Have a great sleep tonight, D.R.!

Best Wishes!
Brought to you by the Paul at 10:12 pm 9 comments: Links to this post

In the first, Mr. Haggard denies everything, seems shocked at the allegations of homosexual sex and drug use, and even asks what is the name of his accuser.

In the second interview, this time with his wife (poor, dear woman) in the seat beside him in their car, he admits to knowing the male prostitute, calling him and buying meth from him. He denies he had a sexual relationship.

I don't think Ted Haggard planned on watching his life and ministry explode on national television. I doubt he got up every morning anxious to hook up with some male hooker. I really know nothing of the man (I'd never even heard of him before yesterday!) other than that he has the same enemy outpost in his heart as is in mine.

And no matter what else, here is what happens to a man who does not, by the Spirit's work, mortify the sinful flesh.

I say, weep over it. Weep over what you see. This is what sin does. This is you apart from grace. You know the evil intentions of your own heart better than anyone else. Oh, it may not be drugs and homosexual sex, maybe just sex with a prostitute or anger that dreams of murder or greed that results in idolatry of the heart. Everyone has their own preferred transgressions.

But, mark this. Sin aims at the uttermost and would kill us every time if it could. So, Christian, I say weep over what you see on your nightly news. Even if the worst allegations are proven false, still this preacher has stood before the world and lied. Look at how evil sin is and remember two things:

1. This is why Jesus died for you.

2. This is what sin will do every time. Give it no quarter!

"But put on the Lord Jesus Christ, and make no provision for the flesh, to gratify its desires."

[One Closing Thought for Pastors: Men, do you desire a large audience. Then take heed. Beg God to never put you in a place of influence unless He goes with you and protects you. And by all means, cry for mercy now for your own soul, and for Haggard's.]
Brought to you by the Paul at 4:42 pm 6 comments: Links to this post

Early in the life of Grace Fellowship Church I realized that a number of my sheep had very little sense of where we fit in the long line of God's chosen people. Names like Whitefield, Huss, Constantine and Fanny Crosby were lost to them - they had no reference point. And there might have been a tendency to think of ourselves as novel, when in fact we were just doing what saints through the ages had been doing - seeking to live for Jesus to the glory of God.

So, I had this idea. What if you could pack the entire history of the church, from the cross through to the present, into one day of teaching. Historical theology force-feeding! Of course, you would not get all the details or all the names, but such a fly-by technique would help to put the whole progress, the "big picture" if you like, into perspective.

Now, an idea like this is great if you happen to be friends with one of the world's leading church historians. [insert smile!]

So, I approached Dr. Michael Haykin and asked if he would be up to the challenge. I envisioned the day as, "Haykin's History of the Whole Church!" He didn't care for the title! So, we changed it to, "No Other Foundation: The History of the Church in Four Parts."

We crammed well over 100 folks into our gym and for one Saturday climbed aboard a luxury airliner with Dr. Haykin at the helm, guiding us over 2004 years of Christ's work in preparing His bride. It was glorious!

These lectures have been off line for a little while as we have been changing things around at our church home page, but they are on-line again as of last night. You can download them here.

No Other Foundation (4): History of Christianity, 1700 - Present

Each file is also accompanied with a pdf of lecture notes that you can print off and follow along - a great tool to use in a Bible study or Sunday School class.

This is vintage Michael - enjoy!

I once baptized a fellow around this time of year, too. It was in the muddy Saugeen River, two and a half hours north of Toronto.

Pure Church: Sweet Sunday
Brought to you by the Paul at 5:20 pm 1 comment: Links to this post

I am tempted to complain of how unjust it is that Derek Thomas can say so much in so little space... and how guys like me have to labour for hours to pop off one sentence anywhere close to one sentence he writes below. I am tempted... but I will not do it.

BUT, you must read this short explanation of how Calvin would view the New Perspective.

Reformation21 » Calvin and NPP: "As someone who believed medieval Rome taught a piecemeal salvation through a treadmill of sacramental performance, something which he equated in its essence to that of inter-testamental Judaism (aka Pharisaism) as a religion which rung the changes on works-righteousness -- seeing both of these as examples of man's innate tendency to idolatry and self-justification, he would not recognize the New Perspective as doing justice either to the exegesis of Scripture or a diagnosis of man's real problem. He would regard it as wrongheaded pastorally as well as historically. As one who insisted on double-imputation, he would find the New Perspective's denial of the imputation of Christ's righteousness as wholly inadequate to deal with the real problem of fallen (Adamic) man's relationship to God. As one who made the cross central, he would be perplexed at the inadequate responses of the New Perspective to the question which inquires as to the necessity of the cross or what it actually achieved. Penal substitution through satisfaction were Calvin's main emphases and a perspective which substitutes ecclesiastical categories (who belongs to the covenant community?) rather than soteriological categories (how can a sinner be made right with God?), and one that answers the former by emphasizing 'boundary markers' of baptism and the Lord's Supper, he would view as Catholicism redivivus."
Brought to you by the Paul at 7:29 am 6 comments: Links to this post

There are all kinds of great posts in the blogosphere today, so if you have a few moments take a look around.

My favorite so far has been Max McLean's dramatic presentation of Martin Luther's famous "Here I Stand" speech. Max gives a nice summary of events leading up to this decisive moment - that alone is worth the listen.

There are a couple of brief biographical sketches on our church website. Each year I like to highlight a different Reformer. You can read of Martin Luther, John Calvin and Ulrich Zwingli (soon).

My godly assistant, Julian, has a nice article on Luther and Prayer that you should read, too!
Brought to you by the Paul at 8:55 am No comments: Links to this post

One of my favorite blogs is Darrin Brooker's, Running Well. Part of what I appreciate about D.R.'s work is its eclectic nature.
For instance, if you did not read his blog, you would not know that grown men venture all over the globe seeking small (and large) medals impressed with the likenesses of famous reformers with which they then decorate unused bookshelves.
I never knew this!
But, alas, I myself have caught the growing "reformation medal bug" and gladly announce to all concerned (and unconcerned) the first member of my collection.
It is a 13 cm impression of Jean Cauvin (John Calvin) displayed here in it's gold embossed collectors box with tasseled gold springy cord.
It is chocolate.
And in honour of Reformation Day, not Halloween, I think that tomorrow I shall eat it. 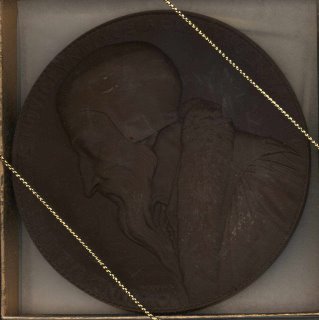 Brought to you by the Paul at 8:49 pm 3 comments: Links to this post