The March for Life Wrecked Me

The size of the crowd caught me off guard. Some early estimates placed it well over half a million. I am not one for crowds and find anything more than 6 kind of suffocating, so shuffling in line for 45 minutes to get screened and frisked in order to stand 100 meters from the Vice President of the United States was not my comfort zone. Neither was holding a sign that read, “All people are created in the image of God.” And that is ironic, because I like to preach about that. I like to preach about that in my church or other churches that are friendly to the Gospel and trusting of the Bible. But there was a sense in this very public demonstration that not everyone in Washington agreed with my sign.
It was just last week another march took place that had a lot more famous people and they laid down the law that anybody like me, anybody who believed in the sanctity of life from the womb to the tomb, was not welcome at their march. And it was like that vibe still hung in the air. So, I felt like a quiet Canadian in a big American thing and it was uncomfortable. 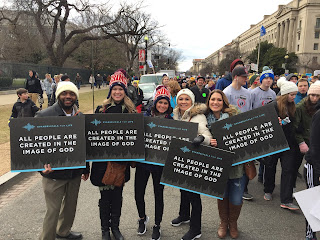 I also felt like I had failed. The March for Life is a Roman Catholic project. Sure there have been evangelical voices in the March over the years, but hardly so. At least 30% of the crowd seemed to be of high school age. Entire Catholic schools had bussed in hundreds of their students to stand for life. I was standing in a sea of the high pitched voices of cheerleaders.  And I was ashamed that my tribe, the evangelical world of which I am happily a part, had done so little for so long. We were a mere flea on this elephantine event.
When Dr. Mohler spoke last night he reflected on how Catholics had centuries of thought and writings in the area of moral law to turn to when the Roe v. Wade decision was handed down. They also had orders of nuns and other social agencies to immediately help women in crisis pregnancies. So, they knew what to do. We didn’t.
A few years ago I was walking past an abortion clinic in a US city and passed two elderly Catholic women who went there every week to lovingly tell the young moms going in those doors that they had other options. Walking with a friend we inadvertently ended up between the sidewalk counsellors and that girl. That poor, scare girl. It all happened very fast but I was changed that day. 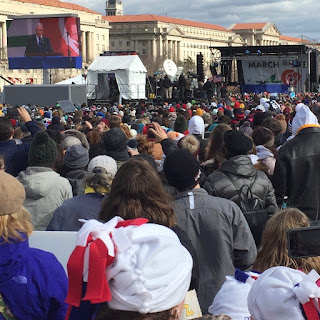 I know my situation is different. Canada has strict rules about how close you can stand to an abortion facility and even what you can say. Plus, we lack that decisive moment like Roe v. Wade to mark our country’s decision to take life rather than protect it. And we are so Canadian. It is not in our nature to march or protest or hold up signs. But I still felt waves of grief for how little I have done to help the marginalized and hopeless in my neighbourhood. I have done some things. But not as much as I should.
So, marching along the Mall with my new friend, Kevin, was a bit of a surreal experience. I was proud to stand for life, yet ashamed I had never done so before. I was thankful for these dear Catholic friends, yet ashamed that we evangelicals had watched in silence for so long. I was thrilled to stand not just for the protection of the unborn, but the flourishing of all human life (especially of the disabled, the refugee, the minority, the oppressed, the aged); yet wondering what more I could do to help the very people I say I want to protect and serve.
All of this going on while T-shirt vendors hawked their wares, the odd food truck offered a cup of hot coffee (for a price!) and some guy on a segue dressed up as Uncle Sam handed out flyers. America. 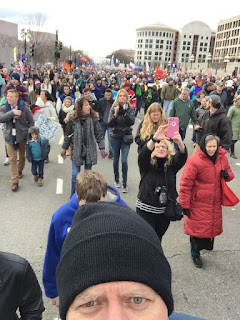 Going to this March, staying in it and actually walking along and carrying my sign was an act of obedience for me. I felt I needed to do this to honour the Lord and take my stand. I am glad I did. But like so many things in life this was only a first step. I am not yet sure what step two and three are, but I know they are coming. Maybe that is what was nagging at my heart all day. There is more to do and the doing of it will not be easy. But it will be worth it, because God loves life and because of that, I do, too. 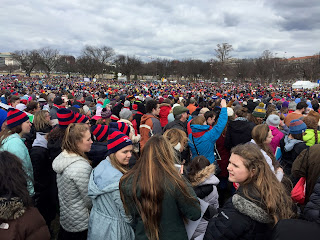 Brought to you by the Paul at 10:40 am No comments: Links to this post