The Fear of the Press

The Fear of the Press

Canadians saw much of the politics of fear in our last federal election, and MSM was happy to oblige the parties with buying in to much of what was presented as “fact.” What is interesting to me in the so-called Cartoon Riots, is the fear of the press in the face of Islam. The irony is shocking.
BBC News will not print pictures of the cartoons even though reputed to be an unbiased presenter of world events. They tippy-toe around written descriptions and do not link to outside sites that contain the images. 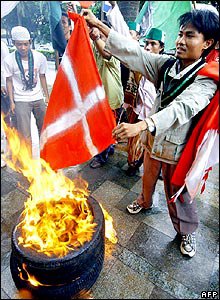 Why?
Clearly it is not out of respect for Mohammed. A quick read of their explanation will make that evident. The only reason they do not show the images is fear. Fear of backlash against those associated with the BBC throughout the world, and for the grand old GB herself.
My point: fear is power.
And that power is exposing the true agenda of most MSM – survival! There is no unbiased, commitment to get at the truth of these events. Just fear.
That is why Christians, in my estimation, will continue to suffer around the world, both physically and emotionally – because they will not resort to power by inducing fear. Why not? Because we fear one far greater than TimeWarner Inc. or the BBC or CTVNews or the National Post. We fear the One who directs the hearts of world leaders like they were water in a little stream carved out by His finger.
Truth is only safe with those who do not fear the world and death.
Brought to you by the Paul at 3:13 pm