Speaking of MANners... Have you see the new Dockers ad campaign?

Good old Dockers is telling men to put on the pants. Here is the “Man-ifesto”

“Once upon a time, men wore the pants, and wore them well. Women rarely had to open doors and little old ladies never had to cross the street alone. Men took charge because that’s what they did. But somewhere along the way the world decided it no longer needed men. Disco by disco, latte by foamy non-fat latte, men were stripped of their khakis and left stranded on the road between boyhood and androgyny. But today there are questions our genderless society has no answers for. The world sits idly by as cities crumble, children misbehave and those little old ladies remain on one side of the street. For the first time since bad guys, we need heroes. We need grown ups. We need men to put down the plastic fork, step away from the salad bar, and untie the world from the tracks of complacency. It’s time to get your hands dirty. It’s time to answer the call of manhood. It’s time to wear the pants.”


"Disco by disco, latte by foamy non-fat latte, men were stripped of their khakis and left stranded on the road between boyhood and androgyny." You gotta love that line! 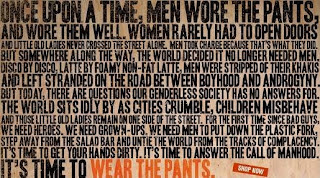