The Bizarreness of Preaching: Some Monday Reflections on a Long-winded Sunday

I had received the question many times before, but never with such sincerity. After telling the 8 year old in the car beside me that I was a pastor, his perplexed face looked at mine and he queried. “Well, what do you do the rest of the week?” So much for bonding with my kids classmates!

I thought of that little guy today as I sat here in my study reading Mariano Di Gangi’s new book, “Great Themes in Puritan Preaching.” Di Gangi noted how many consider the Puritans to have been obnoxious bores... especially when you consider for how long they preached! I had to chuckle to myself. I found out Sunday night that my morning sermon had droned on for exactly 60 minutes. Sixty minutes of me speaking and others listening. It is a rather bizarre thing when you think of it. First of all, I need to say that I generally have a very precise “feeling” for time – as in down to the exact minute. But Sunday was different. There was a conspicuous fatigue in the air at GFC Sunday morning and a lot of our "regulars" were gone. That all made for a different experience, preaching wise, and somehow I thought I had preached for around 40 minutes. Twenty whole minutes off! Yowza! (Which is probably something close to what most of the parents of small children were saying around minute 43!)

Di Gangi writes of some long-winded Puritans, “Undoubtedly, some of their homilies would have benefited from sensitive editing. But such criticisms say more about the shortness of the average listener’s attention span today than they do about a Puritan pastor’s supposed prolixity [wordiness]” (p. 18).

It is remarkable to me that the folks of GFC stayed with me on Sunday morning when I was too long. I think it says much more about them than me (in one respect). There is a hunger for the Word in that lion’s den and whomever the pulpiteer, he had best deliver at least a little meat!

My text Sunday morning was 3:16 and the love of God. It has been some time since I have laboured as much in preparation and preaching of a text. I felt like a schoolboy trying to describe the heavens or a spelunker shining his penlight around a massive underground cavern... there was so much to say! Yet, every word that tumbled out of my mouth felt like felt. It landed soft.

I think, I hope(!), we got a few good glances in on the love of God for the world... but I still felt such a lack. Even as I preached I thought, “Why aren’t you more affected by these things, Preacher!?”

Which leads me to this stunning observation – preaching is odd. Think of it! You are called to labour in the Word, study men’s hearts to figure out how best to get the Truth of that Word into them, then stand and talk (interestingly, not redundantly, but with passion) and your topic is... God! The ineffable, almighty, eternal, good, holy, transcendent yet immanent, Creator of all things – including you (and your voice and mind and heart, etc). And to top it all off, good Christian people sit and labour to listen – working hard to understand what God wants to say through their appointed “stammering tongue.”

I am so glad there is a Holy Spirit.

Sometimes while I preach my mind is praying to the Spirit, begging Him to come and work. Unbelievers were in my church Sunday – and there I was offering them life. If such a thing as a “salvation gun” existed, I would have shot them between the eyes! I want them to be in heaven. But, by God’s appointment and design, it all comes down to this: 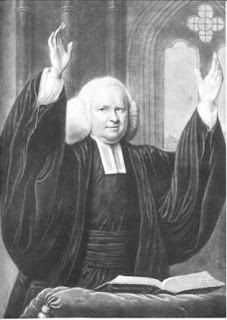 “...if you confess with your mouth that Jesus is Lord and believe in your heart that God raised him from the dead, you will be saved. For with the heart one believes and is justified, and with the mouth one confesses and is saved. For the Scripture says, “Everyone who believes in him will not be put to shame.” For there is no distinction between Jew and Greek; for the same Lord is Lord of all, bestowing his riches on all who call on him. For “everyone who calls on the name of the Lord will be saved.”

Preacher, take aim and fire off the Word. Regardless the skill or incompetence, that Word will not return void. It may be bizarre at one level, but isn’t it also so remarkably grand!