This past week I loaded up the van with my family and took the 9 hour drive to to watch some High School football. Call me crazy.

Two of my nephews start for the team – one is quarterback and the other a wide receiver. Proud uncles can’t resist a combination like that!

has a proud football tradition. I was there in when they won the state championship... not a bad feat for a little town with a total high school population of some 400 or so (including the girls!).

The boys were picked to lose this game against the rival Glenn team from Walkerton, but I never believed it. The day began with nephew Matt announcing to the school via morning announcement video feed that “the relatives from are here to see the game... so let’s win one for !” That got him 5 bucks.

Later that night, we walked to the stadium with hats and gloves and grabbed our spots high up on the bleachers on the 50 yard line. Some Miller kid ran the opening kick off back for a touchdown – which is always a pleasant way to start a game. The kick was good and it was 7-0 Lions with barely a minute (17 seconds to be extremely precise) off the clock. kept the lead throughout, although Glenn was threatening in the fourth quarter when nephew Matt perfectly timed a clutch tackle that popped the ball out of the receiver’s hands making for a very incomplete pass! 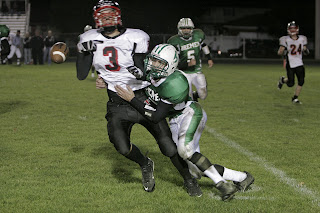 Nephew Chris was rock solid tossing the pigskin, although this was primarily a running game. I never saw the totals, but he must have rushed for about 40 yards himself... with some stunning dish offs ("the option" to purists). Enough to make his uncle cringe in fear! There he was, all wrapped up by some hulking Glenn defender and in the process of falling to the ground when – boink – he would toss the ball to a teammate for some extra yardage. He must have done that 723 times in the game! And it worked. Chris is the king of the little shovel pass in my books.

Chris with the Shovel Pass 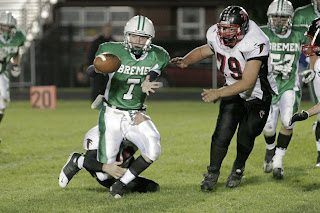 After the victory, the whole team gathered before the stands and sang a sweaty rendition of the school song. Chris spotted me in the crowd and gave me the shout out. That got him 5 bucks.

My kids loved the game and while everyone was playing football, Mrs. Kerux was meeting up with all kinds of old friends from school days. (She saw most of the game, though!)

Best of all, I watched a couple boys I used to throw passes to in the backyard of Grandpa’s house acting like men. And not just on the field either. Both Chris and Matt have given good testimony to a work of God in their lives and these fellows live for Jesus. An uncle could not feel much prouder.

Chris taking off on another fantastic rush! 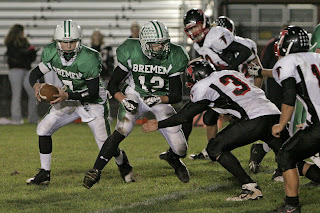 Matt lining up on defense... he plays both ways. 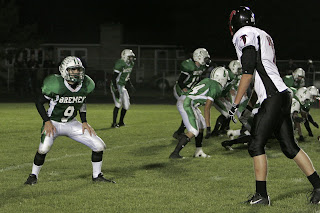 And Saturday morning we got up and drove 9 hours home so I could preach today. What a nice few days!

(Photo Credits: Aunt Karen)
Brought to you by the Paul at 9:13 pm