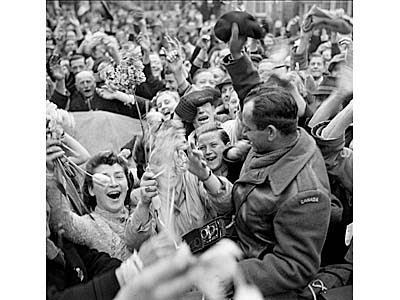 I recently watched a documentary on the Canadian liberation of near the end of WWII. What the Nazi’s did to Dutch citizens was repulsive at best.

It made me wonder what evil might befall this generation, yes, even here in .

We are fools to think we have outsmarted evil.

No one thought Hitler could do what he did. When the evil of and such was exposed, men thought genocide was over. demonstrates it has only been refined.

Like a man moves from the outright lies of a child to the twist and spin of an adult Press Officer, so evil seems to always find new ways to manifest itself, whether in me or my country. Evil might be the one thing in this world that really does “evolve.”

Which means we are fools if we think this world is going to get better – less evil.

“This is an evil in all that is done under the sun, that the same event happens to all. Also, the hearts of the children of man are full of evil, and madness is in their hearts while they live, and after that they go to the dead.”

That is why it is vital we preach Christ and Him crucified, to every sinner and to our own hearts. And the goal here is conversion! And such conversion will lead to sanctification! And all the while Christian men are growingly sanctified, evil will be present.

Until that Great Day. That Day of the Lord!

“For I consider that the sufferings of this present time are not worth comparing with the glory that is to be revealed to us.”

On that day, evil will be finally and forever vanquished. In me. In the world.

Even so, come quickly Lord Jesus!