I am not terribly interested in blogging about politics, but while watching the leader's debate last night, I could not help but think how great it would be if Jack Layton (leader of the socialist New Democratic Party of Canada) were the leader of the Conservative Party of Canada.
Then I thought - even better, what if Jack were a preacher of the Gospel!
In my mind, he is the only one of the four who knows how to communicate by connecting with people. He's got the gift of the gab... with Duceppe a few paces behind and the other guys not even in the running! 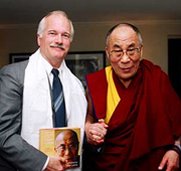 Speaking of Jack, I walked right past him this past June, right in the middle of the same-sex marriage bill - or was that the first run of a non-confidence vote? Either way, there I was with a group of Grade 7/8's and Jack strolled by. I was so shocked that he was just "out for a walk" around Parliament all by himself, that I didn't say a word. By the time I came to my senses, I ran after him past the West buildings... but he ducked into a door and I chickened out following after him.
Opportunity missed!
Brought to you by the Paul at 10:06 am