I was talking with a friend the other day about our fathers. The conversation moved to those men besides our dads who made a father-like impression on us. One of those men for me was my father-in-law, Bob Hueni.
Bob was a man’s man. I mean, he was a little short by my standards, but he was all man. It’s funny what impresses you about a person once they’re gone. As I thought about his deep encouragement in my life I was struck by how few times he actually said something like, “You’re going a great job, Paul.” Because that is almost always what I felt from him. I realize now that so much of that affirmation came from two things.
First, he took an interest in my life. A real interest. Not just in my pastoring (since he was also a pastor), but in all the other stuff, too. We went to Leafs games, worked on the lawn, talked about the Blue Jays… just lots of stuff that he really didn’t have any reason to be interested in other than it was my interest.
Not only did he take an interest in these things, he enjoyed them along with me. Some of my happiest memories of Bob are cheering along the 1993 World Series Champions Toronto Blue Jays from a little hotel room in Southern California. Bob and Letty had come out to visit and made an extended stay of it. We had a blast cheering for the boys in blue. That died in the wool Cubs fan enjoyed my team.
I realize now how precious this all was. And is.
It makes me want to copy him all the more. Take an interest in other people’s lives and enjoy it with them. Sounds like a great plan. In fact, it sounds a lot like how God loved us in Christ. 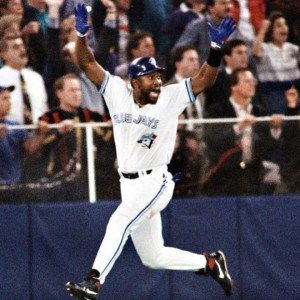