About that Tim Challies Guy

I no longer have the first email I received from Tim Challies, but I remember the first time I saw him. Tim had found me from my “world famous blog” and had suggested we get together for lunch. I pulled up to a local restaurant and spotted a computer-programmer-looking guy standing sheepishly by the door. “That must be him,” I thought. And I was right.

Little did I know where that first meeting would take us. Soon after that lunch, the Challies family made Grace Fellowship Church their home. It was not the easiest transition, but it was certainly deliberate. Tim knew where he wanted his young family to worship.

After becoming members, Tim and Aileen began to serve in various parts of church life. And one of the first things Tim did was to sit down our elders and ask for spiritual oversight. Whatever this blog phenomenon was, Tim knew it could prove dangerous to his soul unless he was submitting to the elders of his local church. To be clear, this was never intended to be a kind of editorial oversight, but the kind of shepherding that every worker should seek. Tim wanted to be grounded, held to the Truth and have people in his life who really knew him and pursued his soul.

Over the years, the church began to recognize a teaching gift in Tim. Soon, the elders saw gifts of leadership and the training of others. We spoke to Tim about the potential of becoming an elder in our church (a long and thorough process) and he was eager to pursue it. He was ordained to the office of elder on May 16, 2010.

Not long after this, our church began preparing to plant another. The elders thought it best to add to our pastoral staff in the process and Tim was asked to join the team. Tim jumped in with both feet and began full-time pastoral work all the while keeping this challies.com thing running. Every day. For, like, 9 million days in a row.

When Tim came on staff, we knew about this website. And we agreed it was good for him to keep it going. The fact that he managed to do that for the next five years while never shirking his pastoral responsibilities had a few of us, well, I guess just me, wondering if he was actually a superhero. Alas, such was not the case.

About a year ago we began to recognize that Tim was going to have to turn away from one of his commitments. This was not an easy thing. For any of us! Grace Fellowship Church loves her pastor. And Pastor Tim loves his church. But both the website and blog had grown to the point where they needed more than Tim could give. We prayed, talked, and thought.

As elders, we loved having Tim as one of our pastors. But we saw and believed in the value of what he was bringing “the outside world” via his website. We also thought that Tim had been uniquely gifted by God to do it. (Not many people have the consistency, integrity, theological chops and wisdom to do this.)

So, we affirmed our love for Tim and our total approval of his stepping down from full-time pastoral work in order to focus on writing and the website. Tim remains an elder along with our other outside-employed elders, but resigned his duties as a paid staff member effective September 30.

A couple of notes.

1. At a later date, I hope to talk about my personal love for my brother. Working with Tim these last five years has been one the real joys of my twenty years of pastoring. I count it a big personal loss to not have my brother in the office anymore.

2. God remarkably supplied a replacement for Tim in the span of about two weeks. One of our church plants sent her interns to our offices for a week this summer. One of those interns was a young man we had sent out with the original group to help plant Grace Fellowship Church, Don Mills. Steve Kim’s unique gifts, love of Christ, desire for ministry and providential availability made him an incredible fit to take Tim’s place. He is already on staff. 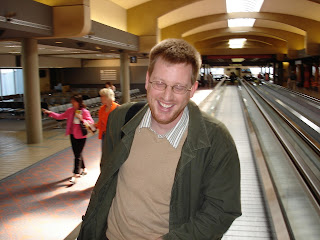 (This picture was taken in June, 2006, as Tim and I made our way down to the very first Together for the Gospel. The very introverted blogger was not used to having his picture taken. Especially in public. On a moving walkway. Where other people might see! I have always loved this photo.)

The most touching moment in this process was when we announced this transition to our members on September 27. The very first question asked was, “You’re not leaving the church, right? You are staying here, right?” And that is everyone’s sentiment. We love our brother and thank God for how He has used Tim to extend the grace of His love to our little church.

In less than ten years, Tim went from being a guy behind a keyboard to a well-loved, well-known, relationally-invested, Shepherd of God’s sheep. Let the example of his faithfulness and zeal spur you on to more love and good works. I know it has done that for me.