I Did Not Know I Was in Debt

And you, who were dead in your trespasses and the uncircumcision of your flesh, God made alive together with him, having forgiven us all our trespasses, by cancelling the record of debt that stood against us with its legal demands. This he set aside, nailing it to the cross.
(Colossians 2:13-14 ESV)

When I was in college a friend approached me the day we were packing up to go home for the summer break. With some embarrassment, he asked if I could pay him back the $50 I owed him. My face flushed with shame. I had completely forgotten about my debt and its payment was long overdue. I was in debt and didn’t know it.

The Bible makes clear that all of us were born in debt. God held an I.O.U. against us, which resulted in making us like dead men walking. In the eyes of the only court that really mattered, there were legal demands and decrees against us. By our sins (our actions that violated God’s instructions) we had effectually signed our own death sentence. But by sending Jesus to the cross, God did two things in our favour. 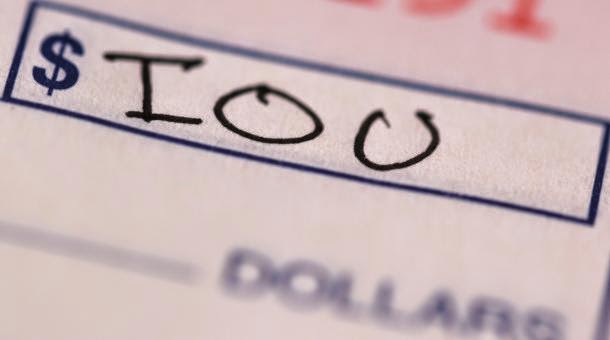 First, He cancelled the record of our debt. Perhaps you have written a lovely birthday card only to ruin it at the end as your hand smudges the wet ink. When the apostle wrote to the men and women in Colossae who had converted to Christianity, he told them that the ink on God’s I.O.U. against them had not just been smudged, but completely washed off. The record of debt was erased. Gone forever by something Jesus did. There was no more record of it.

In a second metaphor, he told them it was as if God had taken that I.O.U. and nailed it to the cross right along with Jesus. It was a sign that Jesus’ death had paid the debt in full. Imagine a large invoice with every one of your sins written on it and then this word written over top in blood: PAID IN FULL.

This is why Jesus came into the world – to alert us to our debt in the eyes of the Holy God, and to make the payment for it on our behalf. Converting to Christianity is not about doing better or trying harder, it is about having your death sentence lifted. It was more serious than mere moralism.

There is an old Gospel song that captures this thought simply:

He paid a debt He did not owe
I owed a debt I could not pay
I needed someone to wash my sins away
And now I sing a brand new song
Amazing Grace, all day long
Christ Jesus paid a debt that I could never

Christians celebrate the death and resurrection of Jesus for this reason. We know that every person who believes on Christ for their salvation and rejects all their attempts at self-justification will be finally set free from their guilt – whether they felt that guilt or not.