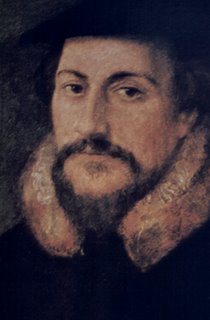 We took a look at the life of Jean Cauvin (John Calvin) last night. Here is a sample from that message with a link to the full article at the bottom of this post. What an amazing life these Reformers lived! Would that we had half their courage and even a fourth of their passion for God and His glory!

Not long after the first edition [of the Institutes], Calvin determined to move to , a steady, safe and secure Protestant city. Military efforts at the time made the trip from to a tricky trip and he was forced to take the long road there, through . Ah, providence!

was a city in a bit of turmoil – not Calvin’s style! Reformers from had come to to evangelize and seen some success. The political leaders of the city were fed up with and ready to find a way to break from the . This led to them declaring themselves to be a Protestant city, even though most of the leaders and residents were not Protestant, nor had they a full understanding of what that meant! William Farel, the leader of the missionaries, now found himself “at the helm of the religious life of the city and sorely lacking in personnel!”[1]

When Calvin arrived in for a “one night stay” word leaked to Farel that the author of the Institutes was in town. Farel immediately arranged a meeting and begged Calvin to stay and help lead the work – but Calvin wanted nothing to do with it. The city was in confusion, loyalties were not trustworthy, massive political change was in order, and the local church was in disarray. Calvin wanted to study and write and this was not, in his estimation, the proper setting for such a ministry.

Farel continued to plead with Calvin but to no avail. Finally, he left Calvin with this famous threat:

“May God condemn your repose, and the calm you seek for study, if before such a great need you withdraw and refuse your succor and help!”[2]

Calvin was cut to the quick! He wrote, “These words shocked and broke me and I desisted from the journey I had begun.” History would never be the same.

[1] Justo Gonzalez, The Story of Christianity, Volume II: The Reformation to the Present Day (San Francisco, CA: Harper and Row, 1985), 65.

For the entire article, go here...